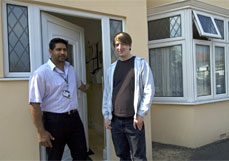 A young woman with mild learning disabilities had been abused at school. She had a history of drugs and alcohol misuse and turned to prostitution which resulted in her becoming HIV Positive. Eventually, she married a man who physically abused her so she left him. Although she found a boyfriend who cared for her, they both ended up being physically, emotionally and mentally abused by an aggressive man who also took over their flat. She and her boyfriend were eventually found walking the streets with hardly any clothes and no shoes and were both hospitalised for 2.5 years. After their discharge, they moved in to a flat together and Comfort Care was able to arrange medical care, and help with clothing and furniture, as well as teaching them the necessary living skills to help them live independently. Comfort Care now offers floating support twice a week to ensure that they continue to progress.

Join us to
make a
difference